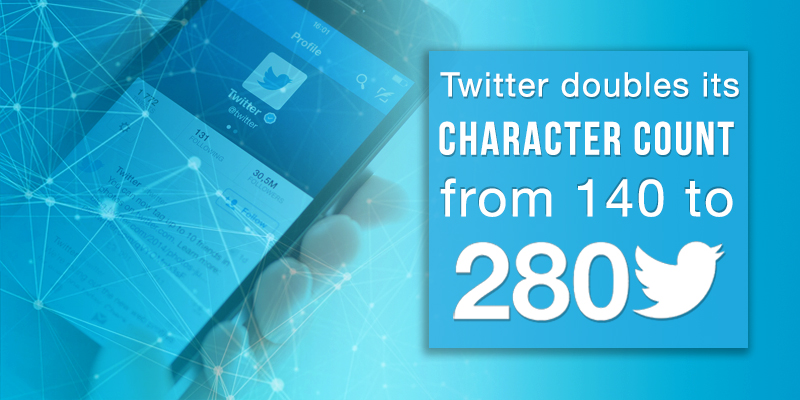 Twitter is considered to be the greatest platform for most of the marketers and with more than 313 million active users with a large young group as members, it is the best marketing tool that generates leads for your business and also helps to build up your brand. Starting with a Twitter page for your company, you can easily handle your Twitter account, upload a profile photo and then fill the bio details and easily send out your first tweet. So, whenever your company has a new product released or an upcoming event, it is important to keep your target audience engaged and interacting. Successful Twitter involvement helps you to become a pro in this fast paced social networking site and also open up new business opportunities.

Till now, while sending a tweeting message, the text limit of the post was limited up to 140 characters. This limitation on the character was often a cause of frustration for people tweeting in different languages as they could not be more expressive and often had to limit their thoughts within 140 characters. Most of the time the users had to frequently edit their thoughts to bring it under the limit, which becomes a burden.

The 140 characters limit actually reflected the length of SMS messages and that was how the tweets were sent before mobile apps were developed. SMS messages are limited to 160 characters. But Twitter had reserved the rest 20 characters for the username and then Twitter became the fast moving platform for sharing news, jokes and etc.

For the past many years, Twitter has always considered expanding the tweet length and at the end of 2015, the company was about to introduce tweets of up to 10,000 characters. But the move was a bit controversial. Twitters identity has always been derived from the brevity of the messages and also its real time nature. Any tweet that is of 10,000 character shown in a Facebook style feed threatened to confuse the product. Ultimately they had to compromise.

Advantage of The Increased Length:

Twitter recently announced on Tuesday that it will increase the character limit for single tweets from 140 to 280 character after thoroughly testing the option among a handful of users The move came after a limited experiment that began in September to check if more character count reduced “cramming” and helped the users to express themselves better.  Twitter has now also confirmed that the 280 character tweets will be available to all the users in various languages, though Japanese, Korean and Chinese language tweets will still maintain the 140-characters limit.

The company also declared that only 5% of the tweets that are sent by people in the 280- character test group were not much longer than 140 characters and it is only about 2% people who were over 190 characters. Twitter is at present interested to increase the revenue and also entice the users to use it without any compromise and remain competitive with Instagram, Facebook and Snapchat.

During the initial days of the tests, many users tweeted to the full limit using 280 characters, but soon the behavior became normal. Many people are of the opinion that the tweets would become too long, but the extra space often made it easy to fit their thoughts in the tweet without keeping in mind the limitations of the characters.

“Doubling the length of the tweet is in fact a radical step by the company and it is believed that the increase in the character will encourage people to write more and share information until you run out of the room.“