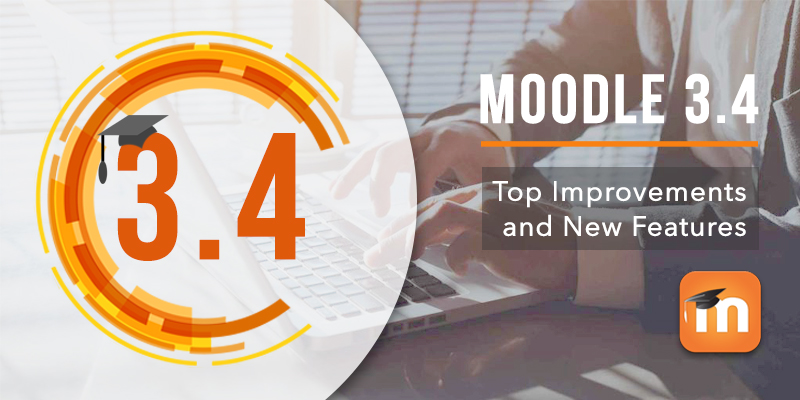 LMS or Learning Management System has gained immense popularity among educators and institutes as it offers a user friendly platform that serves the learning and training needs of people. Moodle LMS is a popular platform that is cloud based, open source and offers a wide range of features to meet specific needs. Originated as a platform to offer educators with the technology for online learning and personalized environments, it gives shape to e-learning and to sectors beyond education.

Since the past few years, Moodle has gained much popularity and every time with a new version release, it has come up with enhanced features and functionalities. Today, Moodle development is used by businesses, corporations, nonprofit organizations, hospitals and etc. for online learning, training and in some extended business processes.  Moodle 3.4 has been released on the second Monday of November 2017 and the new version has come up with improved usability experience for the users and contains a lot of new features that are focused on improving the analytics aspects, usability, administration of Moodle core.

Participants and enrolments page merge into a single page: This is another long pending request from the Moodle community that has finally come true.  At present, Moodle has two different pages containing identical lists of the users that do not offer any significant advantage. The latest version of Moodle has a new merged page of the both that seamlessly gives all the details on a single page so that the information is easy to find, filtered, notified, enrolled/ unenrolled and many more.

Add previous/ next links to activities: Courses that have a natural flow of information from one particular activity to the next, the Next and Previous buttons are more effective than the drop down navigation box. Moodle 3.4 comes with these activity buttons for a better user experience.

Adding predictive analytics to Moodle core: Collecting and analyzing the data from the learning platform is very important and it helps in planning and improving the e-learning provisions. In Moodle 3.3, we already saw the launch of the Inspire plugin, which is Moodle’s official predictive and descriptive analytics engine. Moodle 3.4 has gone further, integrating the technology into the core.

Improvements in the Calendar project: The Moodle calendar has got a usability makeover and originally it is proposed by the Moodle Users Association. The developers, UX team and community have worked on the functional and cosmetic improvements of the Moodle Calendar. It has a more user friendly interface with features like drag and drop that have become a standard.

Specifications for GDPR compliance: The EU data protection laws will be effective from May 25th 2018 after a transition period of two years. Moodle 3.4 is considered to be the first stable release that will have the necessary features for the site, so that it complies with the legislation. It includes more reports and features to help with the GDPR compliance.

Thus, with the rich features, Moodle users and developers will be able to create user friendly, highly configurable and feature rich solutions for the learning industry.