Sitefinity 11 Will Come Up with Support for .Net 4.7

Choosing the right CMS for your website is the first consideration of most business owners as proper publishing of content helps the site to keep the visitors engaged and encourages them to take a quick action. Sitefinity is a popular CMS and is considered by people because of its high ranking professionalism, ease of use, rich features and content personalization options. Over the years, the technology has evolved a lot and with each new version, it has come up with better features and functionalities for the users.

But with the .Net 4.7 update, there has been some issues with Sitefinity and in this blog let’s take a look at it. 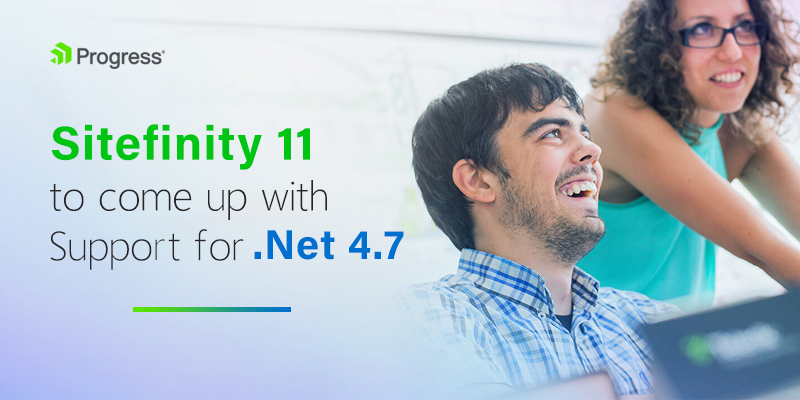 If the Windows 10 Creators Update is installed by the user, then Sitefinity may face some problems to start and the administrative users will not be able to log in to the backend and be restricted to view or modify the content. An error message will be displayed.

The .Net framework that was running on Azure App service was upgraded to 4.7, And unfortunately it was found that there were some issues and Sitefinity based Azure app service was affected after the update in the .Net framework 4.7. the symptoms were like Sitefinity based ASP.NET services might not work as expected and could fail. Web apps also started to fail because of .Net Framework 4.7 updates. The problem usually occurs when there is any complex nested Sitefinity custom membership provider integration that causes the app to break and also raise the exception. This symptom has been observed with Sitefinity based ASP.NET web applications and this has led to the app failure.

Most Sitefinity assemblies are created against the .Net framework and Microsoft has not provided and security updates, hot fixes or even technical support for it. Since majority of the ASP.Net web apps are facing this problem, Sitefinity has decided to come up with Sitefinity 11 that will have complete support for .Net 4.7.

The latest version will come this spring and will offer full support for the .Net 4.7.1. and this change will surely help the users to improve their business productivity and also resolve the errors faster as it will come with new features and with C#7. Besides this, there are other three big features that are worth mentioning of the framework. It includes support for the .Net Standard 2.0, improved performance of garbage collection and security enhancements. It is by following the latest trends that Sitefinity developers can now have everything that they need in order to make their codes more productive.

How will it Affect the Developers and the IT Administrators?

The .Net framework 4.7 version doesn’t come with the Windows/Windows Server machine and the user has to install it. Since this is the latest .Net framework, you should remember that in addition to the development environment, your server on which the Sitefinity application is hosted should also have the similar framework installed.